In mid-July in Yorkshire, England, ITV and other news sources reported that purchasers of “street Valium” got more than they bargained for and a number of them had sought medical attention. The first odd thing was that the drug had turned their tongues blue, and the second was that the drugs’ effects were much heavier than expected. Within weeks, police made an arrest and recovered about 40 more of the suspect tablets.

It appears that the underground compounder making the drugs mixed diazepam (known by one of its commercial names, Valium) with flunitrazepam (known as Rohypnol) or “roofies.” Swiss pharmaceutical giant Roche began blue-dye tagging Rohypnol tabs in response to spiked-drink reports in the United States in the late 1990s. Both Valium and Rohypnol are benzodiazepines, but Rohypnol is stronger. Roche makes both of the name brands, but generic versions are around, as well. Valium is mostly used as an anti-anxiety drug, whereas Rohypnol treats insomnia. (Roche was never all that aggressive in seeking to swim upstream against the negative publicity as it marketed the drug in the US. Rohypnol was too similar to other insomnia drugs anyway, and Roche focused mainly on countering the negative publicity.)

No doubt the purchasers of the illicit drug had expected a Valium-high, but experienced something more anvil-like and presumably suffered some of Rohypnol’s known side effects, such as amnesia.

The recent incident in Yorkshire points up the strangeness of continuing to use the term “date rape drugs” in any meaningful way. References to Rohypnol assume, often without sources or reference, that it is widely implicated in drugging and drink-spiking cases. In fact, Rohypnol is available by prescription in Europe and elsewhere, and it is rarely implicated in predatory drugging incidents. In the handful of cases where anything other than high blood-alcohol levels has been found, none of the commonly labeled “date rape drugs” are among the top substances. Instead, the usual street substances are found, including stimulants. But the moniker “roofie” leapt clear of its origins and took on a meaning of its own.

The Yorkshire Street Valium incident points to a more common problem — adulterated drugs in the illicit market. Up until recently, consumers of illegal or restricted substances had no way to verify that what they were buying was what they thought they were buying. Underground mid-level distributors and wholesalers sometimes employed chemists for verification of samples from larger lots they were negotiating to buy, but the street user was more or less on his or her own. In the US, there have been a number of cases in which seekers of heroin were sold heroin-fentanyl combinations, with sometimes fatal results. Fentanyl is a powerful synthetic opiate, and by weight or volume tends to be considerably stronger than heroin. Also this July, law enforcement in Long Island, NY arrested 24 people in connection with heroin and fentanyl distribution. At least one of the combinations they were distributing seems to have provoked an uptick in overdoses.

But in describing a street preparation as a deadly dose, you have to consider not only the objective effects of a particular dose, but the expectations that the buyer and user bring to the anticipated high. Fentanyl itself is now sought out, on its own or in combinations, by illicit users. Heroin users often expect their purchases to be cut with other things; toxicologists note that most of the time, the adulterants buffer rather than strengthen the effects of the drug. But the haphazard and after-the-fact investigation of the content of illicit substances, as well as a non-transparent supply chain, means that it is difficult to separate effects of the drugs themselves and the drugs’ potential substitutions and additives.

In my book on drugs associated with the “date rape drugs” scare, I noted that there was really no factual basis to label certain popular club drugs like GHB as the preferred weapons of predators. GHB, Ketamine, and Rohypnol – like many central nervous system depressants – have been implicated in specific cases, but any CNS depressant can work, and the labeled drugs are found less often than other widely available drugs (and, of course, alcohol). GHB also presents an interesting conundrum in that it is often not clear whether people who had some in their system were dosed by someone else with ill intent, or whether the GHB was a part of a popular mix of MDMA and GHB sometimes sought out in club settings.

Just to add to the confusion, GHB’s street names are myriad, including Liquid Ecstasy and Cherry Meth. and its effects are seemingly subjective enough to be mistaken for any number of knowingly ingested substances.  The underground compounder often finds that GHB is a cheap substitute for other drugs. GHB is also sought out by recreational users for its reputation as a calorie-free buzz mimicking moderate alcohol ingestion. It can be very dangerous, however, in combination with alcohol.

Voluntary drug users clearly might benefit by being able to quickly and easily test the content and potency of their drugs, but for many reasons the market hasn’t reached this potential public yet.  In my next blog, I discuss the problems with validity and reliability of home and field drug test kits, and the products that come to market to purportedly fix this problem. Depending on context, testing technology can either aid well-being and safety or undermine it. 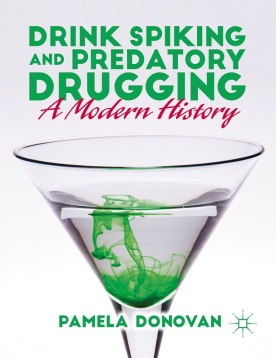 It’s a wide-ranging look at the spectre of the compromised drink, amidst the shifting cultural and gender politics of psycho-chemical treachery. A preview chapter is available at Google Books, and you can also “Look Inside” at Amazon. If your public, institutional, school, or university library hasn’t ordered it, you can make a request.

The news and screaming headlines surrounding the release of a new research study on drink spiking focused on what was hailed as a surprising new discovery about the problem. Women’s Health noted that the percentage of people victimized was appalling, and Cosmopolitan seemed both horrified and somehow relieved that it wasn’t just “an urban myth.” I wonder what number of drink spikings might be taken in stride – I do hope the answer to that remains ‘none’ despite all the misleading fanfare. But you can’t blame the press entirely here. As a social science researcher and writer, I know that it’s very hard to control the media spin on your research, but a press release about the study issued by the American Psychological Association (APA) dodges the study’s limitations and also, oddly enough, its strengths.
“Just a Dare or Unaware?” by Suzanne Swan and associates is being published in the research journal Psychology of Violence. The featured findings do sound pretty dire. But taking a more granular look at the research — and giving better attention to the toxicology and other public health literature, should temper the creepy press enthusiasm a little here.
The researchers developed a pretty interesting survey data set on drink spiking, which suggests that about 7.8% of the college student respondents believed they’d been given drug-spiked drinks. It was an impressively large, multi-campus survey in the US (just over 6,000 respondents.) More than 1% said they’d spiked other people’s drinks. Swan and her associates carefully note that there’s no way to know whether the respondents were really drugged, or whether they mistook their symptoms of excess alcohol for something more sinister. As we can see, the press doesn’t seem to see that as much of a problem, and assumes that suspicion of drugging is indicative of it. It isn’t.
Most toxicology studies — including all of the ones briefly cited in “Just a Dare” — strongly indicate that most people who believe they’ve been drugged and seek help at emergency rooms have not been. Most commonly, they present with extremely high blood-alcohol levels, and sometimes common street drugs. If you want to read a good summary of this research, David Grimes article in The Guardian explains much of the consensus in the field, and reiterates scientists’ plea to pay greater attention to alcohol itself. (And here is a starter bibliography I put together for my recently published book on the topic, Drink Spiking and Predatory Drugging: A Modern History, from Palgrave Macmillan.)
That aside, it seems to me that the press, and to some extent the researchers, have kind of buried the real striking findings here. First, the new study sheds fascinating light on the myriad reasons for drink spiking — both the reasons as interpreted by people who suspect it was done to them and those that say they drugged others. It doesn’t actually refute the urban myth analysis; indeed, it largely supports it. The researchers unfortunately insist on using Weiss and Colyer’s 2010 article in Deviant Behavior and the article I co-authored in 2009 with Adam Burgess and Sarah E.H. Moore in the British Journal of Criminology as a kind of fake touchstone for an “it’s all an urban legend” trope, against which they present what they claim is their own “no, it’s not” data. But both of these articles were about the date rape drugging scare, and in particular the scenario by which a stranger slips a drug into a drink at a bar or party and then hauls off the compromised victim to a private place to sexually assault them. Other social scientists (Valverde and Moore; Berrington and Jones) have pointed out problematic aspects of this scaremongering, early on, from a gendered violence standpoint.
Also buried in Swan’s study is the finding that in a sample of 6,064 students, 67 report being drugged and then subject to unwanted sex (acceding to verbal coercion or hectoring, such as the threat to end a relationship), or actual forced sex. That’s 1.1% of the total sample, and 14.5% of the students who report a suspected drugging experience. (It looks like an additional 13 students suspect sexual victimization, but weren’t sure.) In other words, most people attribute drugging incidents to motives other than the chemically-facilitated rape that the press has touted as an omnipresent danger for more than 20 years. The “date rape drugs” scare has contributed to attempts to breathe new life into the War on Drugs and has people focused on so-called “predator drugs” that are mostly consumed voluntarily, for pleasure or to manage other drugs’ let-down symptoms. According to the respondents in Swan’s study who suspect they were drugged — about a third of whom were male — the some commonly surmised reasons were variations on intended fun and recreation (such as “to loosen me up” and “to have more fun.”) Some said it might have been for malicious reasons, or a mistake. A surprising number (47 respondents) said they just didn’t know.
As for the study’s claim that 7.8% is “higher than expected” — I suppose it all depends on how you see it: That’s honestly lower than even I would have expected, given the hype of the last two decades. I certainly can concur with Swan et al.’s conclusion that public health and public safety interests need to focus on developing interventions that “move beyond the exclusive focus on sexual assault and should address the varied motives of those who drug others.”